Ryder Cup 2021: Why Europe will win the Ryder Cup

HAVEN, Wisc. — The stage is set for a romp, starting with the stage itself. It’s a very big one—Whistling Straits will play roughly 7,400 yards at this week’s Ryder Cup, and U.S. captain Steve Stricker seems to have paid Mr. Mower for overtime work. The rough is negligible so the big dogs of America can gorge with impunity. Throw in a raucous home crowd, and with this still-going pandemic ensuring virtually no European supporters on site, things could be all but over come Saturday afternoon.

If only golf were that simple. What if I were to tell you that the underdog European side could absolutely win this week? Would that blow your mind?

The U.S. are big favorites this week—somewhere around -180 in the betting markets—for all the reasons alluded to above. They’ll have the fans on their side. They have a distance advantage, which will be exacerbated by a relatively benign course setup. They also have the better golfers by virtually any metric. The average world ranking of the 12 Americans here is 8.92, which is downright astounding when you consider that a team comprised of the top 12 players in the world would have an average rank of 6.5. The lowest-ranked player on the U.S. side, Scottie Scheffler, would be the fifth-highest ranked European. Padraig Harrington’s team has an average world ranking just over 30. It’s a mismatch on paper.

More from the Ryder Cup

Predictions
Why the Americans will win the Ryder Cup 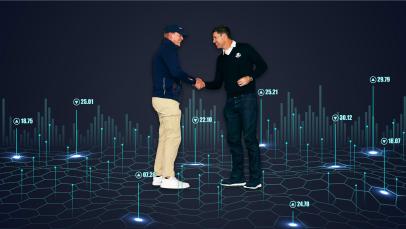 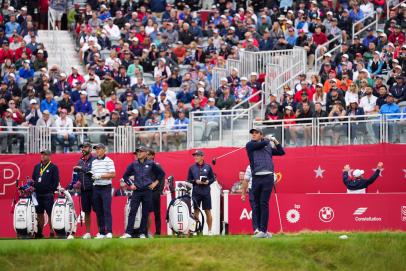 Only the papers are based on 72-hole stroke play events over a two-year period. Match​ ​play golf is an entirely different beast, to say nothing of the whole having-a-partner thing. Consider Rory McIlroy as a case study. He enters this week ranked 15th in the world, behind 10 of the 12 Americans​. That’s all ​w​ell and good, but McIlroy led the PGA Tour in birdie average this year. In the hypothetical Official World Match Play Rankings, the guy making the most birdies sure as hell wouldn’t be 15th.

The world-ranking gulf wasn’t so dramatic in 2018, but Jim Furyk’s team (11.2 average ranking) still held a substantial on-paper advantage over Thomas Bjorn’s side (19.1) and the U.S. got steamrolled. The world No. 1 that week, Dustin Johnson, went 1-4-0 while the world No. 24, Henrik Stenson, went 3-0-0. At the 2019 Presidents Cup, the U.S. side’s average world ranking was 12.2 and the International’s was 40.75, and the U.S. needed a pretty substantial Sunday comeback to avoid an embarrassing defeat. Tiger Woods came into a Ryder Cup ranked No. 1 or No. 2 in the world seven times and went a combined 13-17-2 those weeks.

All this to say: world rankings mean close to nothing in this event.

Ah, but the course! The course will play right into the Americans hands, just as Le Golf National became Europe’s 13th man three years ago. Sure, insofar as that’s even possible. Whistling Straits is hardly Hazeltine and very much not Valhalla. Those courses were wide-open parkland layouts, treelined and wet and beefy, with manicured bunkers—an extreme version of your run-of-the-mill PGA Tour layout. Bomb-and-gouge friendly. This is nothing of the sort. If you dropped someone on the eighth tee without any context, they’d swear the body of water on their right is the Atlantic Ocean. Hell, the other course at this resort is called the Irish. And while the Straits is not a true links, with turf soft enough to make playing the ball on the ground difficult, it’s aesthetically the closest you’ll find in the U.S: next to water, hardly any trees in play, fescue rough, nasty bunkers everywhere, wind always a factor “Doesn’t look like a typical American golf course,” is how Rory McIlroy put it.

“You’ve got to control the ball in the wind,” says Jordan Spieth. “You've got to hit kind of different shots off tees, and then if you position the ball well, you have these green complexes that are kind of—there's not a ton of slope, but they're subtle so you can actually feed the ball into hole locations. Should be a really exciting match play course because you can get into trouble but you can also birdie just about every single hole with the right shot. It's tough and fair, and then if we see it in some colder, windier conditions, it could be a unique test, as well.”

Even if the wind doesn’t blow, if Stricker gets his wish and this place plays as benign as possible, Europe still has a great chance. The old stereotypes of Europeans being low-ball pea-shooters who plot their way around golf courses doesn’t hold true in the modern age of Trackman. Every European other than Bernd Wiesberger plays the majority of their golf in the United States. Europe’s core group, the guys who will play four or five matches, will likely include Jon Rahm, Viktor Hovland, Rory McIlroy, Paul Casey, Tommy Fleetwood, Lee Westwood and Tyrrell Hatton. This is not a case of a bewildered youngsters staring up at the tallest mountain they’ve ever seen.

“I think my guys are good enough anyway if there was no wind. They’re familiar with playing golf around the world, and the quality of their ball-striking is right there. No, we’re not depending on a windy week at all.”

As the unquestioned underdog, the Europeans have the luxury of playing with house money. If they go down early, no big deal. If the Americans go down early, things will begin to move quickly. Oh no, it’s happening again. How is it happening again? Because of guys like Sergio Garcia and Ian Poulter and Lee Westwood, who take great pleasure in spanking the ​U.S. ​and have done so repeatedly.

“I think all three of us are very passionate about the Ryder Cup and we hold it in very high regard,” says Westwood. “We give it our all when we're involved.”

Contrast that sentiment with that of Brooks Koepka, who told Golf Digest that Ryder Cup week is “kind of odd” and complained about team meetings taking away form his gym time. His apparent Ryder Cup apathy isn’t the only distraction for Stricker’s side this week—there’s the Brooks-Bryson fiasco, and Koepka’s health, and Morikawa’s recent difficulties. Europe has ​its ​fair share of guys riding the struggle bus, granted, but the group couldn’t stop laughing during their team picture and look to have meshed as one remarkably quickly.

“When we travel a lot from outside of Europe and to the States or to other places, there’s somewhat of a—we’re outsiders, and we’re trying to prove ourselves. I think there is an element of all that put in, that we’re here to give credibility to the European Tour and the European players…to be honest, my team at the moment, the atmosphere is exactly where you’d want it. Literally I don’t want to mess up from here.”

We’re not here to say the Europeans are definitely returning home with the Cup; we’re saying it’s essentially a toss-up. Their players are more than good enough, golf is a strange and chaotic game, and the Americans are burdened with the weight of expectation. Prepare (and wager) accordingly.