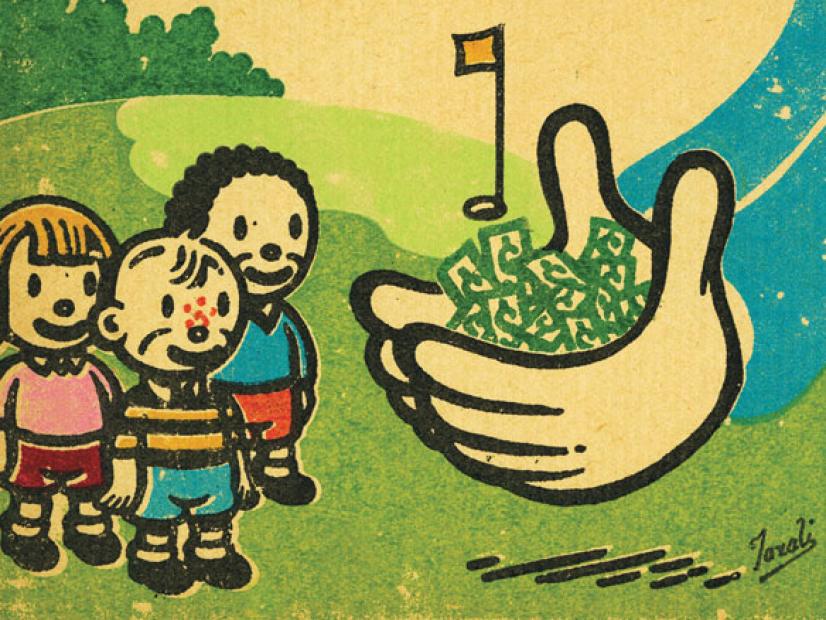 I've always been slightly skeptical about golf tournaments as fundraisers. It's not that I don't support them. They just seem like a difficult and expensive way to raise money compared with simpler events like cocktail parties and silent auctions.

Clearly I haven't been thinking big enough. Jim McGlothlin organized an outing last year that shattered the record for the most money raised by one golf event. Called the Big Three, it generated $15.3 million for the Mountain Mission School in Grundy, Va. That easily eclipsed the $8.6 million generated by the PGA Tour's 2008 Phoenix Open.

It helps that McGlothlin is CEO of energy giant United Co., is owner of The Olde Farm golf club and is one of the wealthiest people in America. He runs with a crowd who can write very big checks that do not bounce. But give him credit: That $15 million didn't make its way to the Mountain Mission School by itself. McGlothlin's Big Three event, so named because it featured Jack Nicklaus, Arnold Palmer and Gary Player, was a massive undertaking -- a testament to McGlothlin's creativity and determination. (See "How to raise $15 million," below.)

Now he's working on a project that, if successful, will make the Big Three event look like a small-stakes skins game: He's trying to raise $100 million for The First Tee. By the end of next year.

The First Tee is a nonprofit group that introduces kids to golf and, by extension, character-building life skills. It is based around nine "core values," including honesty, confidence, responsibility and judgment. Founded in 1997, it has operations at 750 golf facilities and 120 military bases. It also runs programs in 4,200 elementary schools.

In its first 14 years, 5 million children have participated in The First Tee, says Joe Louis Barrow Jr., chief executive. His goal is to add 10 million kids in half that time. This is what the $100 million is supposed to fund. By 2017, Barrow envisions sites at 1,200 golf facilities and programs at 10,000-13,000 schools, Boys & Girls Clubs and YMCAs.

The First Tee plans to divvy the money into three baskets: grants to local chapters based on their strategic goals (retaining more teenagers, for example), matching grants for local chapters' fundraising efforts, and a "perpetual strategic fund" the board can use to fund projects of its own.

McGlothlin is hoping to find 100 people who will step up with $1 million each. He and his co-chair, PGA Tour commissioner Tim Finchem, are approaching "CEOs, other wealthy people who love golf, and athletes," he explains. Isn't this a difficult time to be hitting up people for $1 million contributions to anything, much less a golf-related charity? "It is a difficult time," he concedes. "But on the other hand, this is the time when it's most needed."

The First Tee "is about golf, but it's also about changing people's lives," says McGlothlin, a trustee since its early days. "They learn to organize themselves, to speak courteously, to use etiquette—skills you need to be a successful person." He describes visiting a chapter and hearing a boy talk about learning to use a fork and spoon at The First Tee. "He'd been too embarrassed to eat in public before, because his family ate with their hands."

McGlothlin said he has already secured 21 commitments, some from individuals and others from corporations. Among the former is John Tickle, chairman of building-materials maker Strongwell Corp. Approached about contributing, Tickle knew what his old friend McGlothlin expected. "He's said no to me on occasion and I've said no to him, but nine times out of 10, we say yes," Tickle says.

Tickle and the other donors get some benefits for their $1 million contributions -- some pretty attractive benefits, in fact. They'll play in an event at Augusta National in May, kicked off by a dinner featuring past Masters champions. In October they'll compete alongside tour pros at Pebble Beach, the first of 10 annual tournaments they'll play there.

Granted, most of these people probably don't need to donate $1 million to play Augusta or Pebble Beach. My guess is they have the connections to do it on their own. But you know what? When tournament day arrives, I'll bet not many miss their tee times.

How To Raise $15 Million

Jim McGlothlin's record-setting Big Three event featured Jack Nicklaus, Arnold Palmer and Gary Player playing 19 holes. Amateur threesomes competed against the golf legends in a scramble format for one hole each, paying $100,000 a team. McGlothlin sold 1,200 spectator tickets at $1,000 and 70 tickets to a dinner party at $25,000. That got him to nearly $5 million. Corporate donations, an anonymous gift and sponsorship by Johnson & Johnson accounted for $10.4 million. The total: $15.3 million.