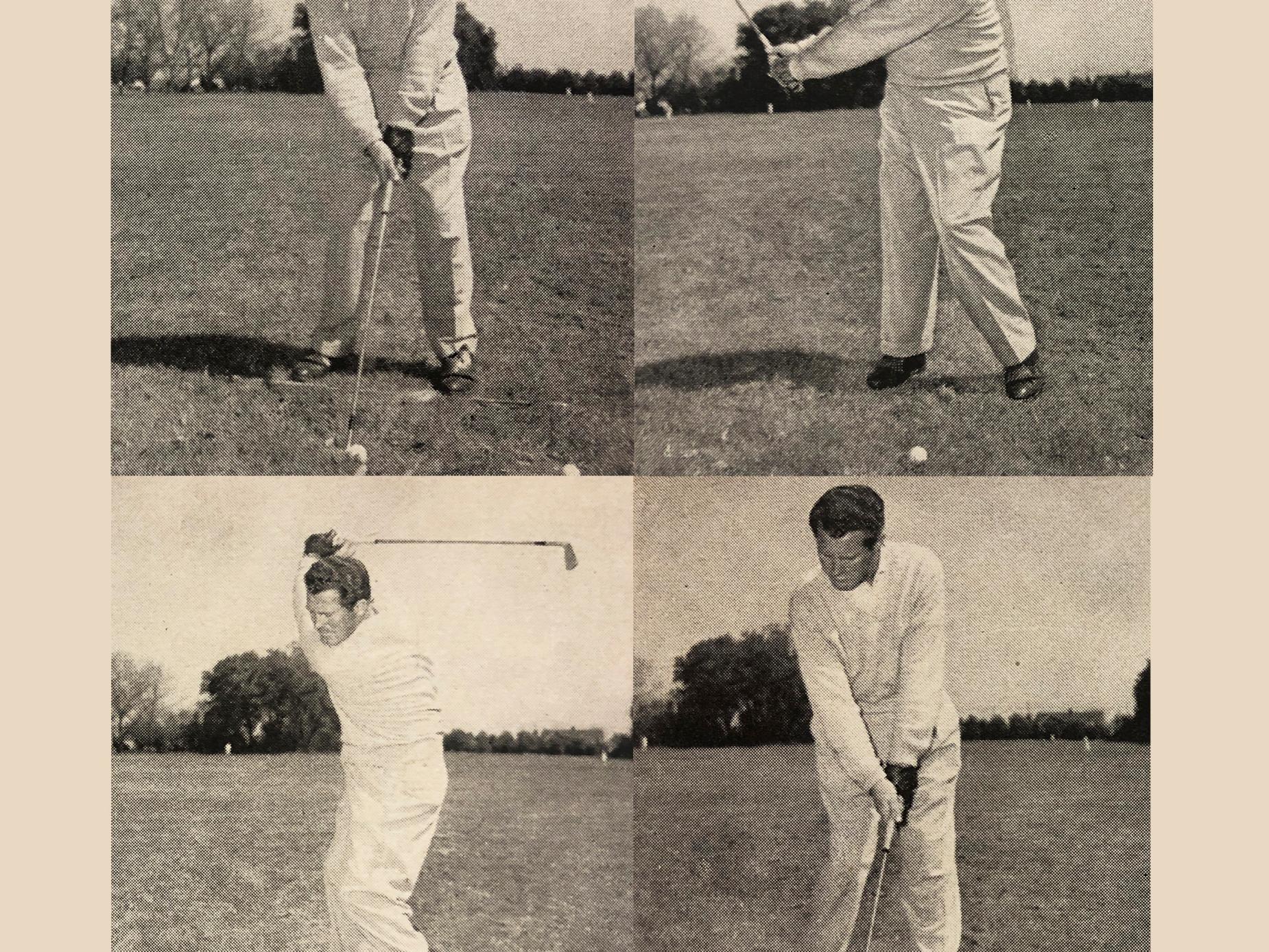 In celebration of Golf Digest's 70th anniversary, we went back through our archives to find a collection of interesting—and sometimes controversial—golf-instruction images and asked today's top teachers to give their contemporary interpretation of the advice from decades past. In this story from 1951, club pro Buck White shows off what golf instruction of the day interpreted to be the five "cardinal points" of the golf swing.

Golf Digest has been preaching the fundamentals of the swing since its inception 70 years ago, and this article is perfectly emblematic of the style of stories we've been writing over those seven decades. In this one (scroll down for the full article), Buck White says there are five main elements to every good swing:

1. A waggle to make sure the swing starts in motion and not from a static position. 2. A steady head throughout the swing. 3. A lower body that moves and shifts ahead of the upper body. 4. A ball position left of center. 5. The downswing controlled by the grip pressure and movement of the lead hand and arm.

Golf Digest 50 Best Teacher Tony Ruggiero gets plenty of chances to break down swings for students like PGA Tour player Lucas Glover at his bases in Alabama and Georgia, and he broke down White's article from the 50s to see how much of it still holds true in applicable teaching today.

What Holds Up Today: Ruggiero loves the advice about waggle and ball position, and says he teaches it almost word for word today at his locations at the Country Club of Mobile and Frederica Golf Club on St. Simons Island.

"I love it when players hover the driver behind the ball and start with some motion," he says. "When you grip it tight and start from that static position, you're limiting your freedom and rhythm."

Ruggiero says players make the ball-position adjustment (left of center) way harder than it needs to be, and White was onto the same point in the 1950s. "In fact, for all shots off the ground, you can set the ball one clubhead width inside the lead foot and just adjust the width of your stance by widening out your trail foot as the clubs get longer," Ruggiero says.

RELATED: Golf instruction: The 7 most spectacular but daunting shots at Pebble Beach

What Doesn't Hold Up: Like most things in golf instruction, technology has allowed teachers to better understand what precise movements in the swing are so important to success. And that's where most of Ruggiero's critiques come into play.

"I can see how somebody would say the lead hand and arm control the swing [back then], especially given what information they had at that time," says Ruggiero. "And yes, how your left hand sits on the club has a huge role in what the face is doing at impact."

But—and it's a big but—placing so much emphasis on the lead hand and arm can create the cavalcade of problems so many modern amateur players face.

"Focusing on just your hands or the lead arm has the tendency to shut everything else down," says Ruggiero. "The best players use some kind of rotation to hit the ball. Even if you don't have much flexibility, the more you can rotate within your range of motion, the better you're going to hit it. That'd be what White would be able to learn from us today."

Another place where Ruggiero draws some distinction between the classic advice and what he teaches now is about head movement.

"A steady head is good thought for some people, especially a hacker who has a lot of slide back and through," says Ruggiero. "But the old stuff tried to put everybody in the same category. A guy like Lucas Glover plays better centered, but a player like Zach Sucher needs to turn more behind it. If you don't have a lot of turn in your swing, hearing you need a steady head is going to kill you." 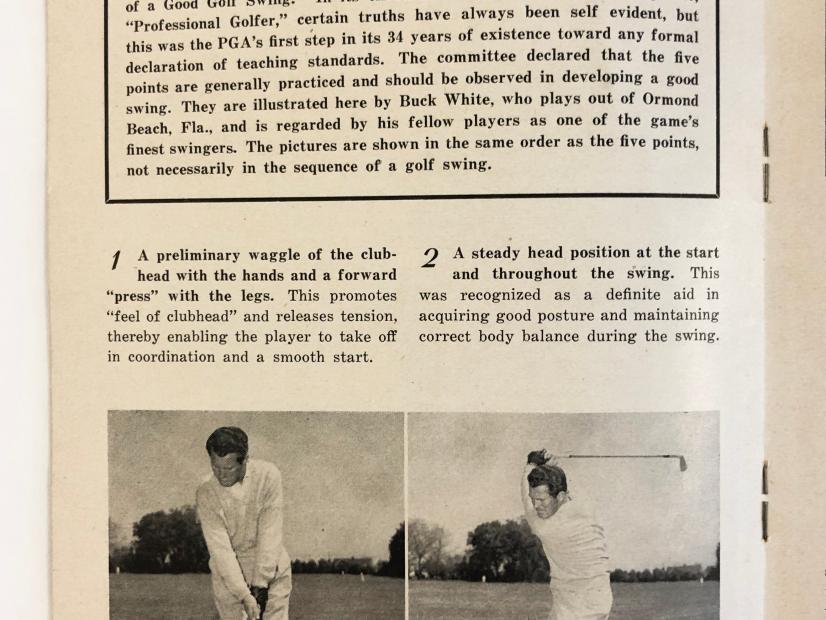 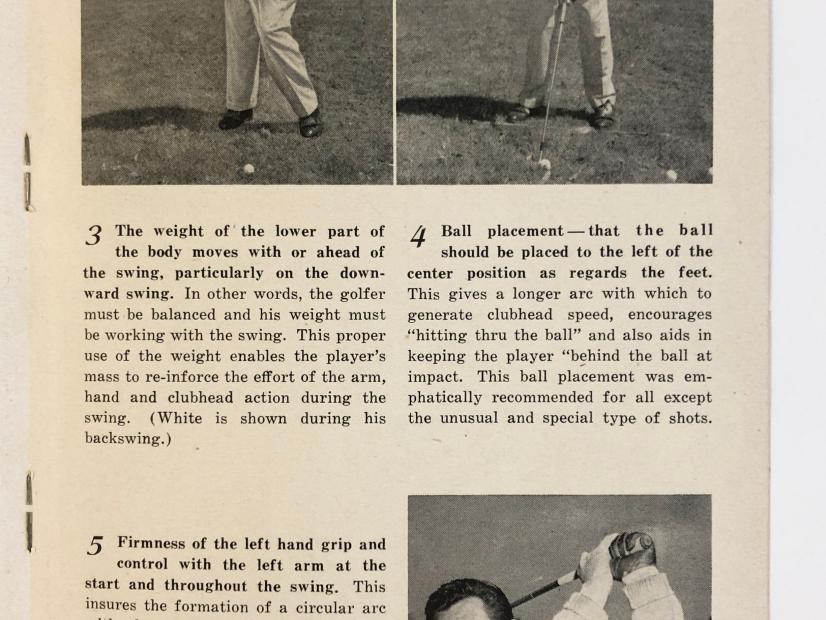 RELATED: How golf's top players knew to use the ground for power—even 50 years ago