The Country Club of Jackson

You’ve probably heard by now that the United States team is a big favorite to beat the International side at this week’s Presidents Cup. And maybe you’re debating whether or not to set aside the time to watch the match at Quail Hollow. Well here’s some friendly advice: How often did we hear this same refrain ahead of the Ryder Cup, only to see the European team overcome the odds and walk off victorious? Are you willing to risk missing out on what might be golf’s biggest upset?

Suffice it to say, there will be plenty of action to tune into over the four days from Charlotte. NBC Sports will offer 29 hours of live coverage over four days, starting with the opening tee shots on Thursday up to Sunday’s winning putt. And every minute will also be streamed via Peacock.

This year’s match will showcase a new feature on the broadcast with the debut of the “Captain’s Camera” offering a live look-ins to the golf carts of U.S. captain Davis Love III and International captain Trevor Immelman.

Below is the complete viewer’s guide for all the action.

MORE: All 24 golfers playing in the Presidents Cup, ranked 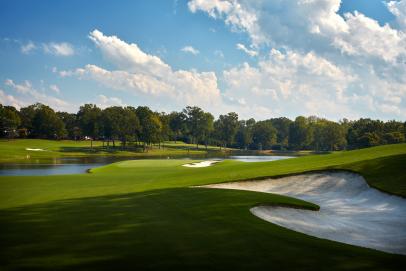 94 Panelists
Few golf course projects had more national attention in recent years than Quail Hollow, mainly because its front nine was redesigned just a year before it hosted the 2017 PGA Championship, won by Justin Thomas. The par-4 first and par-3 second holes were completely torn up, replaced by a new long dogleg-right par-4 opening hole. Several acres of pines to the left of the fifth tee were removed to make room for a new par-3 fourth. (With its knobby green fronted by three traps, it proved to be the most frustrating hole for pros in the 2017 PGA.) More pines were removed to the left of the par-4 11th, replaced by bunkers, and even more trees chopped down on a hill left of the par-4 18th to make room for money-making hospitality boxes. There’s no question that this latest remodeling, rushed though it was, improved the course. The course will also be rerouted for the 2022 Presidents Cup.
View Course

MORE: How Quail Hollow's setup will turn up the drama at this year's Presidents Cup

All broadcasts will be streamed on Peacock, NBCSports.com and the NBC Sports app.

MORE: 5 simple ways to spice up the Presidents Cup now and for the future