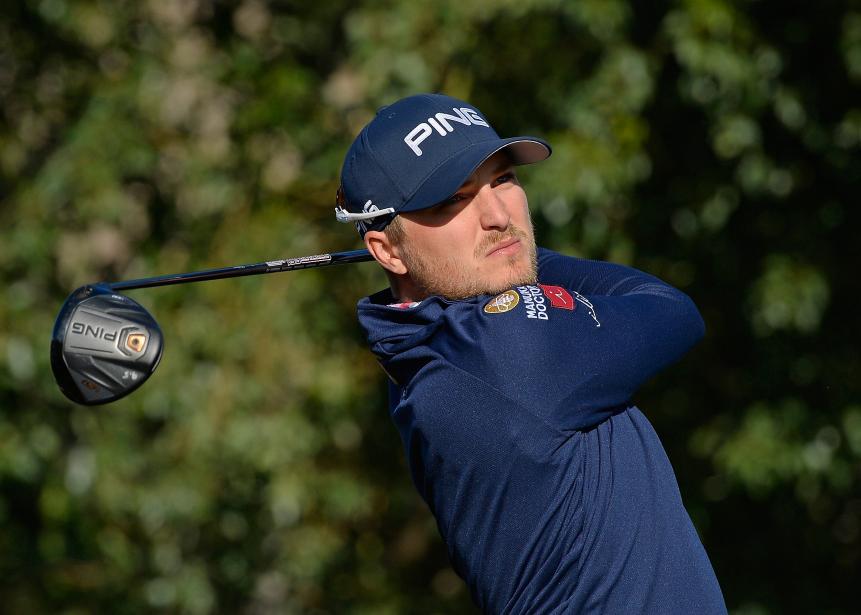 Austin Cook plays his shot from the second tee during the third round of the 2018 CareerBuilder Challenge.

Unless you're a hardcore follower of the Web.com Tour, chances are Austin Cook was a bit of an unknown when he won the RSM Classic last fall, and likely still is for some. But the PGA Tour rookie is doing his best to change that this week at the CareerBuilder Challenge, posting rounds of 63, 70 and Saturday's eight-under 64 at La Quinta Country Club in Palm Springs, Calif., to grab the solo lead at 19-under 197. He leads by one over Martin Piller and Andrew Landry heading into Sunday's final round.

Cook, 26, made three straight pars to begin things on Saturday, then got in a zone, making four birdies and an eagle to turn in six-under 30.

"Missed a few putts early, but starting on my fourth hole I was able to make a birdie and kind of get the ball rolling and it never really stopped rolling," he said.

Even after making his only bogey at the par-4 10th, Cook kept the pedal down, holing birdies at 11, 12 and 15 to get to eight under on the day. At the par-4 18th, it looked like he might drop his second shot of the day after hitting a bunker off the tee, missing the green in regulation and then hitting a poor chip that left a testy, downhill left-to-right 20-footer for par. But Cook drained it, giving him three consecutive up-and-down pars to finish his round.

"I had a perfect number for a pitching wedge, and I just chunked it," Cook said of his approach, adding, "And my pitch shot was below average. I missed my spot by about two yards, and it went 20 feet by and Kip [Henley, his caddie] said, let's finish this like we did yesterday or the first day at the Nicklaus Course. We made a big par putt on 18 there and he said, let's just do the same thing, let's get this line right and if you get the line right it's going in. We read it appropriately and it went in."

Cook looks to join Patton Kizzire as the second player this season to win twice, and a victory would give him two in just his 17th start on the PGA Tour. He's hoping his experience at the RSM can propel him to another trophy.

"I've been in the situation before and I was able to finish the job on Sunday," he said. "I think it would be a little different if I didn't play like I did on Sunday at Sea Island, but I feel like I'm in a comfortable spot right now with my game and just everything's going fairly well and I just hope to continue that tomorrow."

He'll face the Stadium Course at PGA West in the final round, where he carded a two-under 70 on Friday with three birdies and a bogey.

Also playing at La Quinta on Saturday was Piller, who posted his third straight sub-70 round, a five-under 67 with seven birdies and two bogeys to get to 18-under 198. While he's made just one of his last four cuts, he was able to make it count at the OHL Classic at Mayakoba, finishing in a tie for fourth, matching the best finish of his career on the PGA Tour.

Landry, the 36-hole leader, took on the difficult Stadium Course on Saturday and fared well, carding a bogey-free two-under 70. Both he and Piller have had success on the Web.com Tour, but each is in search of the first PGA Tour victory this week.

Adam Hadwin, Grayson Murray and Brandon Harkins are just three off the lead at 16-under 200.

Phil Mickelson was unable to make the 54-hole cut after posting a two-over 74 on the Stadium Course, making for a disappointing start to 2018.