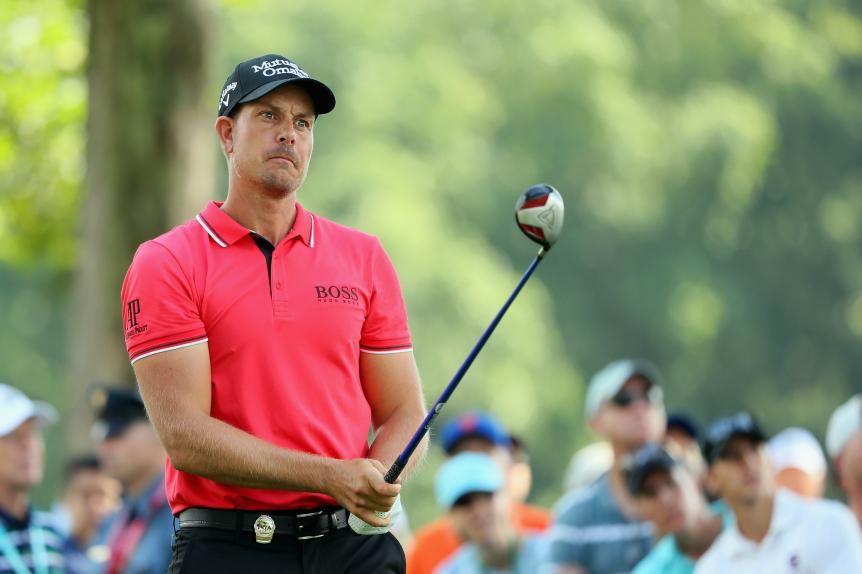 SPRINGFIELD, NJ - JULY 29: Henrik Stenson of Sweden watches his tee shot on the 15th hole during the second round of the 2016 PGA Championship at Baltusrol Golf Club on July 29, 2016 in Springfield, New Jersey. (Photo by Andrew Redington/Getty Images)

Henrik Stenson surged with the firm, soft conditions on Friday morning at the PGA Championship, shooting a three-under 67 at Baltusrol Golf Club in Springfield, N.J., to take the lead.

The 40-year-old British Open champion grabbed the outright lead with a birdie on his 17th hole, and was one stroke ahead of Patrick Reed, Jimmy Walker and Martin Kaymer.

Reed had the best score of the morning, firing a five-under 65, enabling him to move 34 spots up the leader board at the time, and was in a three-way tie for second. The world No. 14 is in pursuit of his first career major.

Jordan Spieth was one stroke off the lead until the 16th hole, where he bogeyed following a controversial relief ruling from a puddle. Still, he finished his round at three-under 67 to climb back into contention, three behind Stenson.

Dustin Johnson's woes continued, though, as he delivered a two-over 72. The U.S. Open champion finished 36 holes at nine-over 149, and missed the cut.

The afternoon wave has been delayed by about 40 minutes due to a weather delay early in the morning. Rickie Fowler (two under) tees off at 1:40 p.m. EST, while Jason Day (two under), Phil Mickelson (one over) and Rory McIlroy (four over) start at 2:30 p.m. EST. The leader Walker will tee off at 1:50 p.m. EST.

[Click here for the entire leader board from Baltusrol.] (http://www.golfdigest.com/story/pga-championship-leader-board)