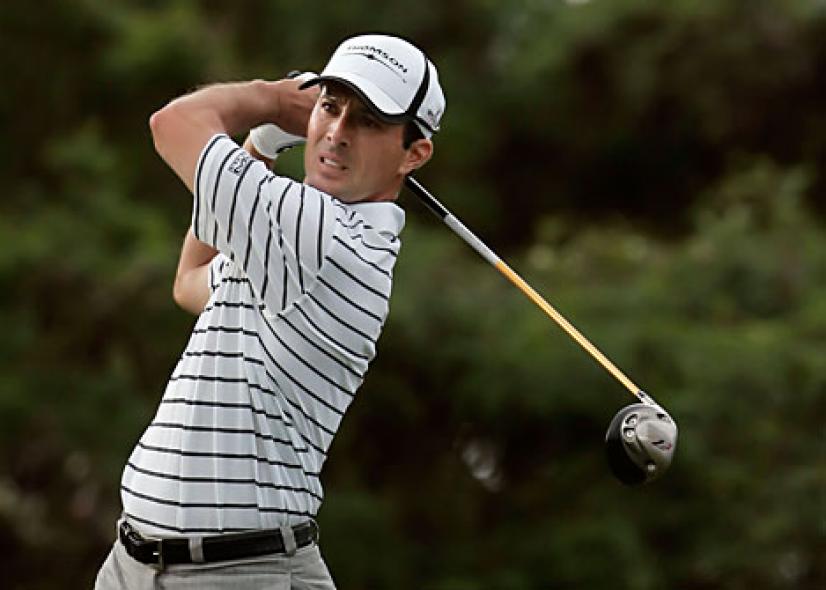 The frigid temps of a Canadian winter were a distant memory for Mike Weir.

The frigid temps of a Canadian winter were a distant memory for Mike Weir.

KAPALUA, Hawaii (AP) -- Mike Weir wasn't surprised to see more Canadians than usual on the west coast of Maui this week. The winters can get nasty in the Great White North, and it doesn't hurt that the dollar hasn't been this strong in decades.

But a pair of Canadians atop the leaderboard at the Mercedes-Benz Championship?

Weir now lives in Utah, although the winters aren't much different from the native land. He has spent the past month moving into a new house, and the only 18-hole round he played before coming to Hawaii was at La Costa during a visit to San Diego County to check on his golf equipment for the coming season.

The time off must have served him well, and the weather Friday certainly helped. There were no bursts of showers, only passing clouds over Kapalua, and wind wasn't nearly as vicious.

The result was a bogey-free round of 6-under 67 that gave him a one-shot lead over Stephen Ames and Jonathan Byrd.

Ames was born in Trinidad & Tobago but has been a Calgary resident since 1991, and is now a naturalized citizen. He came to Kapalua with even more rust, having not played an 18-hole round since he won the final PGA Tour event of 2007 at Disney.

True, he won the Skins Game, but that was nine holes a day over Thanksgiving weekend. And he did arrive at Kapalua on Dec. 20 for a family vacation, but only played 18 holes -- nine a day with his son.

He had only one blip in the second round, a three-putt on the seventh hole, while making seven birdies. The last one was from 20 feet on the 18th hole that gave him a 67 and put him in the final group Saturday with Weir.

"Am I playing with Mike in the last group?" Ames said. "Then yeah, we'll probably have the biggest crowd."

There's also a crowd atop the leaderboard, so Kapalua might wait a few days before changing its logo to a Maple Leaf.

Weir finished his round with an 18-foot birdie that left him at 8-under 138. Another shot back was Ames and Byrd, who made birdies on his last two holes. Sixteen players were separated by five shots going into the weekend, with a forecast again for moderate trade winds and enough of the occasional showers to keep the Plantation Course soft and long.

Brandt Snedeker was atop the leaderboard for much of the round for the second straight day. The problem Thursday was a hairline crack in his driver that led to a double bogey-bogey finish. He got that replaced and had few complaints, but it was his putter that hurt Friday.

Snedeker missed a short putt on the 11th that bit into his confidence, and he was well off the mark on several putts. Still, he had a chance to share the lead on the 18th hole when he hit his approach into 15 feet. But he ran it about 3 feet by the hole, missed that coming back for a three-putt bogey and had to settle for a 69.

"I played really good," Snedeker said. "I missed a short putt on 11, and it wasn't the same after that. I didn't make any putts coming in, which is very unlike me. I'm normally a very aggressive putter and just couldn't seem to get comfortable on those last eight holes. Hopefully, we'll get it squared away on the putting green and get ready for the weekend."

Nick Watney, who led the first round after a 68, made two late birdies for a 72 and was at 6-under 140 with Snedeker.

The best round belonged to Mark Calcavecchia, certainly no flat-belly but in much better shape for the Plantation Course at Kapalua after hiking up South Mountain outside Phoenix to get his legs in shape. He hit every green in regulation, three-putted twice, but still made nine birdies in his round of 66 and was at 5-under 141.

What helped more than a steady heartbeat was the weather.

Clouds drifted across the Kapalua for most of the day, but there were no steady blasts of showers until the end of the round. The wind wasn't nearly as severe, either, and it reflected in the scoring.

The course played more than three shots easier. Ten players broke 70, compared with only two in the first round.

Perhaps the best example was the 503-yard ninth hole, which plays into the trade wind and was so tough earlier in the week that most players had to blast a fairway metal just to reach the second portion of the fairway. Weir isn't the biggest hitter on tour, but he managed to reach the green in two on Friday, then made a 15-foot eagle putt that sent him on his way.

Ames found the answer late Thursday afternoon on the putting green, when he noticed his head too far behind the ball that caused his putter to swing upward too quickly through the ball. He corrected the problem and took only 26 putts in the second round.

Weir and Ames are thrilled to be at Kapalua, perhaps because it took so long for them to qualify. Weir's previous victory was the Nissan Open in 2004 as he retooled his swing under Andy Bennett and Mike Plummer. He saw progress, but didn't get any measurable results until one glorious Sunday at Royal Montreal, when he beat Tiger Woods in a singles match before a delirious home crowd at the Presidents Cup.

It was no coincidence that he won three weeks later in Arizona as part of the Fall Series, the third-to-last event of the season.

"I think there was a correlation there," Weir said. "It was a tough few years. I felt like I was on my way there. To win after 3 years is almost harder than the first one."

Ames won the final event of 2007 at Disney, winning by one shot with a bunker save from 65 feet. He only went to Disney to work on his game, and this week is not much different.

"I went there to work on my game, and I'm still working on my game," Ames said. "I'm happy with the progress I've made."